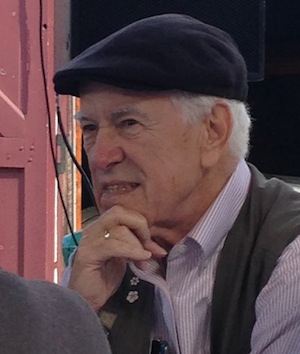 Silver Donald Cameron was one of Canada’s most versatile and experienced professional authors. Silver Donald Cameron was also the Host and Executive Producer of the TheGreenInterview.com, an environmental website devoted to intense, in-depth conversations with the brilliant thinkers and activists who, he believed, are leading the way to a green and sustainable future. His literary work includes plays, films, radio and TV scripts, an extensive body of corporate and governmental writing, hundreds of magazine articles and 20 books, including two novels. He passed away on June 1, 2020, of complications arising from lung cancer.

At the time of his death, Silver Donald Cameron was completing the first year of a three-year appointment as the first Farley Mowat Chair in Environment at Cape Breton University.

At The Green Interview, Donald Cameron interviewed green leaders such as Vandana Shiva, Farley Mowat, Robert Bateman, Jane Goodall, David Suzuki, George Monbiot, and the former Prime Minister of Bhutan. Through its partnerships with Gale Cengage Learning, Films on Demand and Kanopy, the site’s 100 interviews are available in tens of thousands of libraries and educational institutions around the world.

Silver Donald Cameron also wrote and narrated The Green Interview’s two documentary films, Bhutan: The Pursuit of Gross National Happiness (2010) and Salmon Wars: Salmon Farms, Wild Fish and the Future of Communities (2012). In addition, he was the writer and narrator of the ambitious GreenRights multimedia project on environmental rights, www.GreenRights.com.

As a writer, Silver Donald’s subjects included history, travel, literature, politics, community development, ships and the sea, education, public affairs nature and the environment. His most recent books are Warrior Lawyers: From Manila to Manhattan, Attorneys for the Earth (2016) and The Education of Everett Richardson: The Story of the Nova Scotia Fishermen’ Strike 1970-71 (2018), a republication of his 1977 work of the same name which was named “One of Atlantic Canada’s 100 Greatest Books.”  A second edition of his classic study of shorelines, The Living Beach: Life, Death and Politics Where the Land Meets the Sea, was published in 2014.

Silver Donald Cameron’s last book, Blood in the Water: A True Story of Revenge in the Maritimes, is about the “murder for lobster” case in Cape Breton Island in 2013. It will be published posthumously by Penguin Random House Canada in August, 2020.

His books have received the Evelyn Richardson Award, the Atlantic Provinces Booksellers Award, and the City of Dartmouth Book Award. His TV drama Peggy was named Best Short Film at the Canadian Film Celebration , received a Moonsnail Award, and was also a Gemini Award finalist. His magazine articles have received four National Magazine Awards. Four of his radio dramas have been ACTRA Award finalists; The Sisters (available on CD) was also nominated for the international Prix Italia. He has won both a Mercury Award and a Wilmer Shields Award for corporate writing.

Silver Donald had been Writer-in-Residence at the Nova Scotia College of Art and Design, the University of Prince Edward Island, and the University College of Cape Breton. He was a member of numerous Canada Council juries, and had served as a consultant to many corporate, governmental and non-profit clients, including four federal departments, five provincial departments, several important corporations and major charitable foundations.

He had also been an active practitioner of community development, active in the credit union movement and numerous other voluntary organizations. He was the founding chairman of Telile, Isle Madame’s community television station, and also a founding director of Development Isle Madame. He had served several terms on the executive and National Council of the Writers Union of Canada.

Silver Donald Cameron was married to Marjorie Simmins, who is also an award-winning journalist, author and essayist. The couple made their home in the village of D’Escousse on Isle Madame, Cape Breton. Dr. Cameron had five adult children.

To those who have asked how Silver Donald Cameron came by his nickname, Marjorie Simmins provides the following anecdote: “He got fed up with people mistaking him for umpteen other Donald Camerons in this region, and across the country. He said his own mother in BC got confused at one point, thinking he’d written an article that he had not. And one time, when Don phoned Billie Joe MacLean, the long-serving mayor of Port Hawkesbury and the mayor answered the phone saying, “How are you, you old fart?” thinking he was talking to his friend who owned the A & W, that was it. Donald Cameron was going to change his name. So good friend Tom Gallant, author, actor, musician and sailor, took one look at Don’s dark eyebrows and prematurely silver hair, and christened him “Silver Donald.” Don loved it, and even wrote a funny article about changing his name. Essentially, it’s a Cape Breton nickname – and Don loved those, and having one himself.”