WHAT CAN ONE PERSON DO? 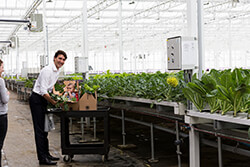 “What Can One Person Do?” began as a TEDx talk developed in response to the despairing question of a student at Dalhousie University. “The problems are so huge,” she said, “so various, so overwhelming. What can one person do?”

In response, this keynote presents video clips of several inspiring figures from The Green Interview whose whole lives constitute a stirring response to that question — an Icelander who has single-handedly ended most commercial fishing for Atlantic salmon, an Englishman who builds hydrogen-powered cars and aims to reform the whole automobile industry; a Dutch lawyer who forced the Netherlands government to honour its commitments to address climate change; an Ecuadorian who won a $9.5 billion lawsuit against Chevron for polluting the headwaters of the Amazon, and others.

What can one person do? One person can change the world. Many inspiring figures are doing just that. These people are a tonic for the spirit, an antidote to despair — and that’s what this keynote is designed to provide.

The original TEDx talk can be streamed at http://ow.ly/XmgoO  ​Some of these people are included in my book Warrior Lawyers: From Manila to Manhattan, Attorneys for the Earth and my 67-minute feature documentary film, Green Rights: The Human Right to a Healthy World. A screening of the film, and/or a deeply discounted bulk purchase of the book can be packaged together with the presentation.

The trailer for the Green Rights film can be screened here: http://ow.ly/NxSt30c5UrV,  and a private link to stream the film is available on request. The book and film are part of the Green Rights project (www.GreenRights.com).

This program is perfect for:

The audience members will leave with: